Almost all of the world’s leading clubs and International teams use video analysis as an integral part of the match day preparation. It has become one of those ‘under the radar’ activities that underpins everything the spectators see on the field of play, writes Pete Kelly.

More than half the current Premiership clubs employ at least one video analyst at the highest level, with other resources deployed in their academies. Virtually all the championship clubs, many of whom have also played in the premiership in recent seasons also use video analysis, exclusively using SportsCode software.

Middlesbrough for example has long been regarded as having a very ‘go ahead ‘academy, headed up by former teacher David Parnaby. They have seen the value of using the Sportstec Gamebreaker as this brief Case Study shows.

Moving further afield some of the iconic European clubs are heavily committed to video analysis. Pep Guardiola the legendary manager of Barcelona and a former star player at the club himself created the FootballLab for the first team of FC Barcelona. We all know what impact his great squad has had on the Champions league over the past few seasons on the field of play. Experience teaches us that none of this success would have been delivered without exhaustive work at the training ground where video analysis was vital cog in the well oiled ‘Barca’ machine!

Given the outstanding results of the ‘FootballLab’ Barcelona expanded the project to embrace the Recruitment department, the Academy and the second team. This venture was paralleled with their basketball section with the BasketLab. 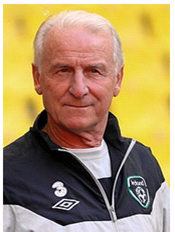 Giovanni Trapattoni took over the Ireland job just over five years ago and he has made the use of Video Analysis a corner stone of his preparation for games. Trap’s emphasis on using video analysis is carrying on the work done under previous Irish managers in that area, but in reality he has embraced it with both hands and is a firm believer in the technology and the value of it. 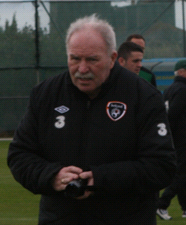 Brian McCarthy braving the elements in Malahide at an Ireland session earlier this year.

Brian McCarthy the FAI analyst with the senior squad has worked with all the Irish managers for the past 12 years while also working with the elite underage squads as well. He has been the ever present link and has developed an excellent working relationship with Avenir Sports the Galway based company that supplies the world leading Sportstec software.
On the home front the Airtricity League of Ireland is a microcosm of the world game with its ups and downs, financial challenges and a never ending struggle to succeed. Innovative coaching methods, evolving attitudes towards better preparation and a realisation that performance analysis can be a useful tool in your kitbag is beginning to gain some traction in the league.

Limerick FC, recently promoted and making every effort to become established see performance analysis as key element in the game preparation. Moving their home games to Thomond Park, while being an initial risk seems to be pay dividends with good home attendances. They see using Performance Analysis as an investment rather than a cost and their leap of faith deserves success. In addition to Limerick, Bray Wanderers are also using the technology, while Salthill Devon from the first division have also invested and will use the software throughout the club for both match analysis and coach education.

In the next article in this series we will look at how video analysis is used in coach education.

We use cookies to ensure that we give you the best experience on our website. If you continue to use this site we will assume that you are happy with it.OkNo
Revoke cookies