Ask any number of people involved in the game of soccer – or any other team game for that matter – to define what Performance Analysis is, you are likely to get a variety of answers. Go one step further and ask a number of individuals to analyse what has just happened in a particular game and the range of answers is guaranteed to cover a much broader spectrum, writes Pete Kelly.

The very fact that you will get a plethora of responses points to traditional methods being anything less than precise.

Performance Analysis is a relatively new discipline in sport, only really coming into focus in the last ten years or so. However the rapid deployment of Performance Analysis across a range of sports has been facilitated by the advances made in software and video equipment in the past few years. 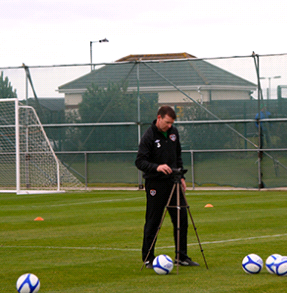 Alan Kelly sets one of his three cameras for a goalkeeper’s session prior to Ireland’s friendly with Greece, earlier this year.

Traditionally the above coaching process was practiced using what many called the ‘back of a fag box’ method. This involved the coach/manager of teams making hastily scribbled notes (or not) and subsequently delivering his/her observations to individuals or squads whose memory of what happened was at best a little hazy.
In these situations personal preferences are impossible to ignore, allowances are inadvertently made and the overall result is a flawed picture of performance. In essence this approach amounts to not much more than statistic gathering; with very little emphasis on understanding what they might mean. If a team gets several corners, umpteen free kicks, ‘X’ number of ‘offsides’ what does it really mean?

However the camera does not lie and if you have footage from several angles to examine, then both team and individual performances can be evaluated objectively so that improvements can be effected.

In this series of articles Avenir Sports Soccer Solutions in association with Extratime.ie, will examine how Performance Analysis is used at the highest levels of the game – be it at Senior International, Premiership or Champions League.

Additionally we will examine the role that Performance Analysis will play in the developing ‘Grassroots Game’ here in Ireland and the collaborative efforts with The Football Association of Ireland to further develop the Coach Education programmes.

Avenir Sports Soccer Solutions is also supporting the Emerging Talent and League Centres where the next generation of international players are being identified and nurtured – thus feeding the various underage international squads. Next week we will look at Performance Analysis at the elite level.

We use cookies to ensure that we give you the best experience on our website. If you continue to use this site we will assume that you are happy with it.OkNo
Revoke cookies