The Ballybane Enterprise Centre will host an evening seminar, free of charge on Thursday 3rd April, on Digital Marketing, with particular emphasis on Facebook for Business.

The seminar will provide a broad outline of the concept of Digital Marketing , debunking the jargon, with a particular emphasis on how businesses can positively impact their performance by engaging with customers through social networking.

This evening session will be a precursor to a full day workshop on Saturday April 12th . The full day programme will provide a more in-depth and comprehensive knowledge of Facebook for Business and the opportunities and resources which can be deployed.

The evening seminar & workshop will be delivered by Pete Kelly of 15 Eleven Communications and Gary Mullin of Ion Connect. Gary and Pete have developed a series of workshops to illustrate, particularly to small business, how the medium of social media can best be employed in a cost effective fashion.

Pete Kelly is founder of 15 Eleven Communications with over 30 years’ experience in a variety of management, training and advisory roles, predominantly with multi-national companies. He is a member of the Irish Institute of Training and Development.

Gary is the Co-Founder and Creative Director of ION Connect. He has completed a Masters in Strategic Marketing at J.E Cairnes School of Business and Economics NUIG and is an expert in all aspects of social media.

“There is an almost ‘mind-boggling’ set of options open to individuals and companies today when it comes to using social media to promote their business. “One size does not fit all – what the small, business needs are scalable affordable options”

Gary and I have crafted a series of workshops that we feel will cut through much of the complexity and allow the user to identify a set of tools that best suits their particular needs.” according to Pete Kelly.

What is Performance Analysis – the Technology and Methodology

Ask any number of people involved in the game of Hurling or Gaelic Football – or any other team game for that matter – to define what Performance Analysis is, you are likely to get a variety of answers. Go one step further and ask a number of individuals to analyse what has just happened in a particular game and the range of answers is guaranteed to cover a much broader spectrum, writes Pete Kelly. The very fact that you will get a plethora of responses points to traditional methods being anything less than precise.

Performance Analysis is a relatively new discipline in sport, in Ireland, only really coming into focus in the last ten years or so. However the rapid deployment of Performance Analysis across a range of sports has been facilitated by the advances made in software and video equipment in the past few years.

Video Analysis is the first and most important step in improving your Football team’s performance. Using a suite of SportsCode Video Analysis Software Tools, You can tag games live or in even more detail post match. Avenir Sports is Ireland’s leading Performance Analysis company and they help elevate teams to new heights across a wide range of sports.

Simon Kavanagh the technical support and training manager at Avenir explains “Performance Analysis software is so powerful and easy to use it can be adapted to fit any analysis situation. You can devise your own analysis templates that can include as much or as little information as you need. You decide what you want to see. As it is so easy to use you can code a match in less than real time.” Essentially the process is pretty straightforward. The video analyst films the game, captures the footage, analyses the game based on a predetermined template and subsequently shares or disseminates the clips in line with the coaching strategy of the team.

The extent of the coaching staff will always vary from a fully professional team to tight knit ‘elite amateur’ to player development coaching. However the basic principals will be the same, it is the depth that will change from ‘live in-game’ analysis to post event performance evaluation and gameday strategy preparation. At the development level the emphasis will typically be on skill development and understanding systems of play.

At the professional level in sport the action will be captured from at least two and probably three camera angles. In Gaelic games, this means inter-county level and regularly now the counties have the benefit of using TV footage of their games in the National League and Championship. Additionally they may shoot the game themselves from two further angles – ‘Tactical ‘from behind the goal looking straight down the field and ‘Technical’ from a ‘side-on’. Each angle will be shot from a height to give
perspective

Pictured above is a typical view of a ‘stack’ from two angles in this year’s Railway Cup semi final. 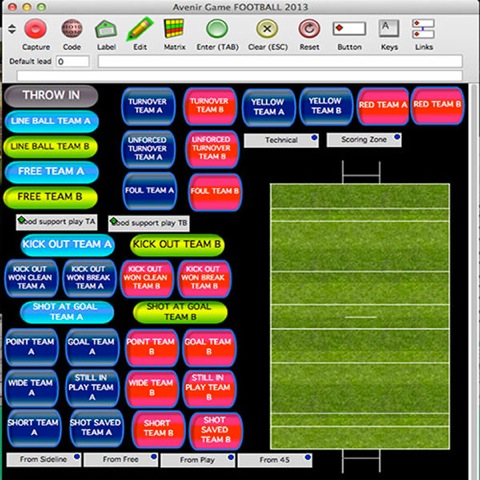 The second step in the process is analysis using a coding template. The ‘coding template’ typical example seen here, is created by the analyst and will reflect exactly what the coach/manager requires in terms of instances of play and individual clips for players focussing on their individual performances.

Sharing of your analysis information is one of the most important (and frequently overlooked) steps in the Performance Analysis process. Currently several inter county team use a web based application ‘YouCoach’ allowing players access to targeted feedback and ensuring that they are fully prepared for training sessions, thus maximising contact time, additionally it allows team members to post questions and answers on their movies to ensure that they have grasped the coaching point successfully.

Performance Analysis is a iterative process, with several ‘stand alone’ episodes along the way. It is certainly an in-depth match day performance, an objective evaluation of what transpired and an opportunity to influence future performances through feedback. This enables an evolving game plan strategic designed based on sound evidence. However video analysis is not confined to game day filming and post mortem evaluation.

The technology and philosophy can be applied to pre-season training, skills development and conditioning with equal effect. “if you can shoot it, you can capture and analyse it” is a good rule of thumb! This is perfectly illustrated by the clip available here showing inter county players working on their conditioning in the gym.

The equipment and technology available today has made it possible for GAA teams at all levels to develop a practice and philosophy making ‘Performance Analysis’ a key element in the development of players and preparation of teams. The leading counties are pushing the boundaries and achieving new levels – the others are catching up fast!