St Paul’s School from Concord New Hampshire came to Galway last week renewing a relationship forged about 20 years previously when they also came to Ireland for their pre-season training. I had the experience then, 20 years ago,  of coaching the squad and on this occasion I had pleasure of meeting the players and coaches on a social basis, before and after games, at training and at meal times – interacting with the touring party was fun and educational, writes Pete Kelly.

They say that travelling broadens the mind – a notion that I have always subscribed to. It allows individuals and groups that might on the face it seem similar to explore other cultures behaviors and attitudes.

St Paul’s arrived in Galway as a soccer squad from an American boarding school, so on the face of it a bunch of teenage Americans boys with a passion for soccer and whatever else young men of that age are interested in.

However, the boys represented eleven different states and four different countries, with at least half a dozen ethnic connections thrown into the mix – so an eclectic and diverse group.

Sitting down with these guys for a chat, of course, highlights differences with say Irish lads of a similar age but it also shows just how much we all have in common.

The impressive thing about these guys was their inquisitive nature and interest in what was happening around them – the co-operation and interaction was great, particularly when we tried to come up with Irish (Gaelic) versions of their names.

On the field of play you could see the team improve each day as they encountered new systems of play and embraced them in games with the Salthill Devon FC Boys. So, overall an absolute credit to their families, their school coaches Jim Watt and Ben McBride. 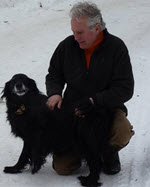 All of which brings me to my old friend Tom Johnson of Atlantic Crossing. Tom’s Atlantic  Crossing has been organising and traveling with groups for longer than either of us cares to  remember. Tom has a unique style! his experience has taught him that no tour is ‘one  dimensional’, so he insists on a multi faceted itinerary. While the tour is essentially a ‘soccer  experience’ the group also get to see something of the local heritage and interact with a mix of  top class coaches, kids of similar age and ‘chiseled old tourists’.

As a person with very strong ties to the United States I have always held the belief that all young Americans should travel to expand their knowledge. St Paul’s School educates their pupils to a standard that is second to none – sending them abroad is the icing on the cake and perhaps something they should consider as a staple.

Where better to set your destination than Galway? and who better to organise that than Atlantic Crossing.