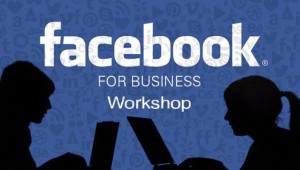 This workshop will provide a detailed blueprint of how to utilise Facebook for Business,  emphasising how businesses can positively impact their performance by engaging with customers through this particular  social networking medium.

There will be particular emphasis on Advertising on Facebook and how to interpret your Analytics correctly.

The Workshop; Facebook for Business  will be delivered by Pete Kelly and Gary Mullin. The event is a collaboration between  15 Eleven Communications and Ion Connect . Pete Kelly of 15 Eleven said “we are looking forward to delivering the workshop again – we had a great response to the November event.

“Social media continues to be a major influence on the way we do business, whether is a multi-national corporation we are talking about or a local “self driven” business, be it service or retail”

Using Social Media to promote your business will be different for everybody. “It is not ‘one size fits all’ you have to figure out what is best for you business, that’s why the workshop environment allows people play around with the concept, ask questions and get helpful advice that best suits their particular needs.

We live in the ‘Digital’ age with more and more of life, education and business being conducted either online or interacting greatly with the world of social media and the many other technological advancements that the internet has delivered to us.

Pete Kelly of 15 Eleven Communications explains that for almost everybody the era of Social Media is very new. “The rapid expansion of the various social media platforms, with Facebook, Twitter and LinkedIn being the most visible has only happened in the past six years or so” “Nobody has grown up with these concepts and remarkably the fast growing demographic on Twitter is the 55 to 64 years age group”

Pete and fellow tutor Gary Mullin are delighted to be join with the GTI in offering these evening programmes. “The Social Media classes ran in the  Autumn term successfully and in addition this time the Digital Marketing programme is also being offered. This is a FETAC level 5 programme and will have wide appeal to those wanting to augment their CV’s and also to small businesses embarking on an online  marketing strategy.”

Details and online booking at

This week has been designated European Code week or to give it it’s twitter hashtag  #codeEU. Europe Code Week has been championed by Neelie Kroes, the Dutch politician who is the  European Commissioner for Digital Agenda and is also a vice president of the European Parliament.

Ireland is leading the way across the EU when it  comes to encouraging youngsters to take up coding and in Ireland Galway is taking a leading role. That Galway Education centre, with Bernard Kirk at the helm has been pivotal all week in promoting and organising a large number of events.

Computer programming is being heralded as the new literacy, yet it is still widely perceived as a skill that can only mastered with a computer science degree. With the wider availability of internet connectivity and freely available, easy to use technologies, this is no longer the case.

With that in mind, over twenty events have been facilitated across a number of city primary schools this week, with the objective of encouraging the 11/12 year olds to ‘give coding a try’. The response from the kids has been brilliant and it is also provoking a growing interest among teachers, who can see the value of young children experimenting with the basics of computer programming.

There are several ‘coding tools’ available today which makes programming a ‘fun thing’ rather than a chore. MIT’s Scratch is a project of the Lifelong Kindergarten Group at the MIT Media Lab. It is provided free of charge. MIT is the world’s leading university and as they put it “Scratch helps young people learn to think creatively, reason systematically, and work collaboratively — essential skills for life in the 21st century.”

The “Twitter Machine” has been hopping all week as the various schools have been tweeting their messages about their particular events. Local Galway politician and junior minister Ciaran Cannon is a keen tweeter and a strong supporter of all efforts to better equip youngsters to position themselves to cope with the ever changing technologies.

Bernard Kirk points out that while a lot of emphasis this week has been on the primary school students, coding is not  a preserve of youth. “On Monday we had six and seven year olds involved and on Tuesday we had a groups of active retired teachers visit the Education Centre for some Scratch demonstrations”It is a certainty that a large proportion of the ‘working lives’ into the foreseeable future will be heavily influenced by computers with the consequent requirement for people to programme them. The conventional wisdom at present would tend to indicate that the work will be available and that is why educators like Bernard Kirk and the Galway  Education centre see their work of encouragement with both teachers and students as critical future proofing.

Click below to see the Galway City Tribune coverage.

The Ballybane Enterprise Centre will host an evening seminar, free of charge on Thursday 28th November, at 6.30pm on Social Media, with particular emphasis Twitter & LinkedIn. This is the second in a series of three Seminars and Workshops on Social Media for Business.

The seminar will provide a broad outline of the Twitter & LinkedIn for business. This evening session will be a precursor to a full day workshop on Saturday December 7th which will deliver a comprehensive knowledge of Twitter & LinkedIn and the opportunities and resources which can be deployed.

The Seminar & Workshop will be delivered by Pete Kelly of 15 Eleven Communications and Gary Mullin of Ion Connect. Gary and Pete have developed a series of workshops to illustrate, particularly for small business, how the medium of social media can best be employed in a cost effective fashion.

“We are looking forward to an exciting Seminar on the 28th,” said Pete Kelly, “Our recent seminar on Facebook for Business was attended by over fifty people and so early registration is advisable on this occasion also. The full day workshop on December 7th will also have a limited number of places”

This workshop will provide a detailed blueprint of how to utilise Twitter & LinkedIn emphasising how businesses can positively impact their performance by engaging with customers through this particular social networking medium. Registration for the workshop, fee €50, can be completed online at www.15eleven.com or by contacting Pete Kelly on +353 868531052 or Gary Mullin on +353 879304349.

The Ballybane Enterprise Centre will host an evening seminar, free of charge on Thursday 24th October at 6:30pm, on Social Media, with particular emphasis on Facebook for Business.

The seminar will provide a broad outline of the role and value of Social Media in society today with a particular emphasis on how businesses can positively impact their performance by engaging with customers through social networking.

This evening session will be a precursor to a full day workshop on Saturday November 9th. The full day programme will provide a more in-depth and comprehensive knowledge of Facebook for Business and the opportunities and resources which can be deployed.

This evening seminar and full day workshop is the first in a series will be followed by further events which will focus on Twitter & LinkedIn & YouTube, Blogs & Other Social Media.

The Social Media seminars & workshops will be delivered by Pete Kelly of 15 Eleven Communications and Gary Mullin of Ion Connect. Gary and Pete have developed a series of workshops to illustrate, particularly to small business, how the medium of social media can best be employed in a cost effective fashion.

“There is an almost ‘mind-boggling’ set of options open to individuals and companies today when it comes to using social media to promote their business. Gary and I have crafted a series of workshops that we feel will cut through much of the complexity and allow the user to identify a set of tools that best suits their particular needs.” according to Pete Kelly.

Pete Kelly is founder of 15 Eleven Communications with over 30 years’ experience in a variety of management, training and advisory roles, predominantly with multi-national companies. He is a member of the Irish Institute of Training and Development.

Gary is the Co-Founder and Creative Director of ION Connect. He has completed a Masters in Strategic Marketing at J.E Cairnes School of Business and Economics NUIG and is an expert in all aspects of social media.